Cherie Raciti
The Everyday Buddhas are an offshoot of The Buddha Heads, 2005-2009, a series of mixed-media paintings of abstracted Buddha figures. Drawings alone did not always give me enough information to deal with problems that arose from the stylization of certain features such as the long earlobes and the bulge on the top of the head. These had to be invented in a way that kept the shallow relief of the surface created by layering

Instead of using the photographs intended as a source for more drawings, I layered the encaustic (wax) directly on them to build up the surface. This allowed more spontaneity and flexibility in developing the relief. Although they started as a means to an end, the encaustic buddhas images soon took on a life of their own and became The Everyday Buddhas and an important part of the entire Buddha Head series.
Buddha Heads Series Statement 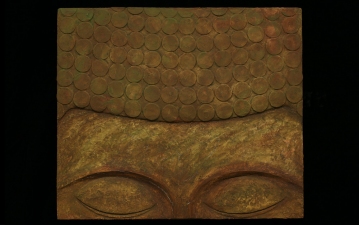